The Dog That Saved Warner Bros. 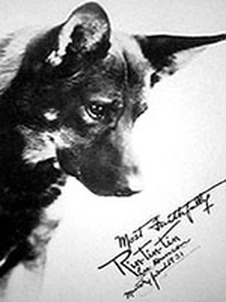 Since the early days of cinema, Hollywood dogs have been making a name for themselves. Household names like Lassie and Benji have delighted generations of families, but the first of the famous dog stars was Rin Tin Tin, who starred in over 25 movies for Warner Bros. between 1922 and 1931. In his early films, he would occasionally play a wolf, even though he looked nothing like one; but silent film audiences weren’t as demanding as today’s.

Born on this day in 1918 on a French World War I battlefield, Rinty was an overnight success and one of Hollywood’s biggest stars during the 1920s. It’s said that the box office success of his movies saved Warner Bros. from bankruptcy. It’s funny to think that a dog saved Warner Bros., but Rin Tin Tin was as big as any human movie star. Young fans wrote to him tirelessly — over 10,000 letters a week — and Warners kept several stand-in dogs available to give their biggest box-office star a rest on the set. In 1930, he starred in his own radio show, originally titled “The Wonder Dog,” but soon changed to “Rin Tin Tin,” in which he provided his own barks, growls, and other dog sounds.

Rin Tin Tin made his last appearance in the 1931 serial, “The Lightning Warrior.” Blonde bombshell Jean Harlow, who was a neighbor of Rin’s owner Lee Duncan, held Rinty in her arms as he died at the age of 13.

Audiences, however, would still get their fill of Rin Tin Tin adventures for years to come. Junior, Rin’s offspring, took over for the remainder of the 1930s, starring in serials and taking over the radio show. For the popular ’50s TV show “The Adventures of Rin Tin Tin,” four different dogs were used, with Rin Tin Tin IV starring. Today, Rin Tin Tin X (yes, that’s “Rin Tin Tin Ten”) still makes appearances, putting smiles on the next generation of children’s faces.